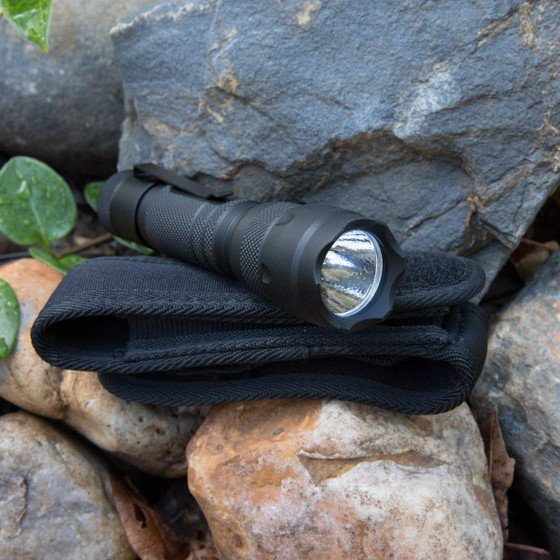 While Supplies Last: Extreme Beam M4 Scirrako Flashlight - Refurbished* - Logo etched off and some minor scratches may be seen but it's operationally perfect! Only $39.99 for this flashlight normally sells on amazon for $104.99

Why are we selling them for so cheap? We bought these as a closeout sale from the original vendor. All flashlights have been factory refurbished and may have scratches and the logo etched off.

What you sacrifice in cosmetics is not sacrificed in performance. All of these flashlights have been inspected by our professionals and are in 100% perfect working condition. Plus with a 30 day return policy - you can't go wrong!

The Ultimate Tactical Light: The Alpha-TAC XT8 ProRanger is ExtremeBeam’s Most amazing Tactical Lighting Platforms. Simply stated, it's exceptionally modular. From its adaptability with the Metal Molle, and the Molle-TAC adapters to it optional UV and IR Bulbs, the XT8 ProRange is simply a rugged, dependable highly efficient Extremely Durable workhorse Super-Duty Tactical Light...Humbly stated....

With its unique built on belt/pocket clip, and blindingly bright white-hot precision-focused beam, the XT8 ProRanger has quickly become a preferred tool among its Military and Law-Enforcement Patrons. Although the most compact of ExtremeBeam’s full-service tactical lights, the XT8 ProRanger retains all of the Rugged Shock-resistant and Impact-resistant features of its larger relatives. From it Anti-Recoil Shock-Pin design to it nearly 4mm thick High Density Aluminum Alloy walls, The XT8 ProRanger ranks among the toughest Tactical light ever produced in the history of tactical lighting.

The Modular Design of the XT8 ProRanger is key to its uniqueness. The XT8 ProRanger bulb assembly can quickly be switched from its Standard Super-High-Output LED systmem to the traditional Xenon bulbs where such systems are requested, or to an advanced forensic UV system for crime seen investigation. And in literally seconds, the Metal-Molle can be added for use by FireFighters with the extreme advantage of it fire-resistant housing and convenient 90 degree design.

The XT8 ProRanger can withstand the abuses expected on the battlefield, while still carrying the finesse and beauty fit to be carried by top-rank officers. The XT8 precision optical reflector along with its High-Output LED light-source, provide the XT8 ProRanger with 10,00LUX of extremely bright High-Definition lighting, Shooting its beam out nearly 260 meters, giving the officer the ability to temporarily night-blind a suspect or enemy and providing the additional life-saving seconds of advantage in close-confrontation situations.

Whether you need to light-up a target at 265 meters, or light-up the top of a 15 story building, the XT8 ProRanger is your premium tool of choice. And with an average battery run time of 3 hours on a set of CR123 batteries, the XT8 ranks among the most efficient and brightest of tactical lights in its class. The Alpha-TAC XT8 ProRanger truly lives up to the company’s reputation as a first class precision tactical light, and

This product hasn't received any reviews yet. Be the first to review this product!